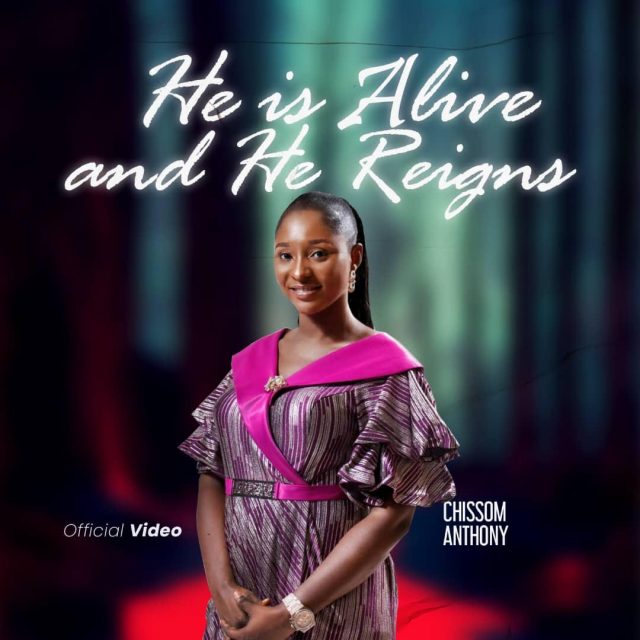 Amazing female gospel minister,  Chissom Anthony has released another soul-lifting song titled, “He is alive and He reigns” which  is a follow up to her last release ‘Glory to God in the highest.

Chissom Anthony is well known as an immensely talented and well-structured artist with the way she puts out her craft, she has been on the professional music scene for a while now dishing out amazing melodies to glorify the name of the Lord with. There’s a lot of hardworking Gospel Singers out there today doing the work of Christ the best way they know-how, releasing songs and albums, organizing Christian outreaches, and pushing this Gospel to the ends of the earth. A perfect example is the Gifted Chissom Anthony who has been consistent with what she does.

Chissom Anthony has a lot of songs out from the inception of her music career, a lot of which has amassed great praise from people around her and beyond, she has been consistent ever since and has recently released her new album “GLORY TO GOD IN THE HIGHEST” which is garnering the much-needed plays and people are in awe already.

“He is Alive and He reigns” is said to be one of her best works yet, Chissom Anthony definitely was inspired by the Holy Spirit on this one, our God is Alive and we can all see the signs around us in our world today. Chissom edifies the Lord with this highly spiritual song.

“He is Alive and He reigns” is out now on all major streaming platforms for download /streams get into the flow now, it’s the reign of the Gospel!