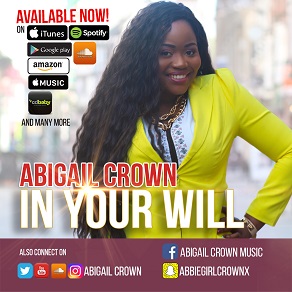 Music minister and Song writer Abigail Crown, is thrilled to announce the release of her debut single, “In Your Will”.

This song was birthed in a place of uncertainty of the future and a desire to be in God’s Will whatever the future holds.

“In Your Will” is an expression of eternal commitment and absolute surrender to God’s plan and purpose. It would serve as a means to shift your focus and gaze on God.

Abigail started writing songs in 2012, at the age of 16 and developed an interest in professional music production. In 2015, she received divine inspiration to develop her talent and become a music minister. She then began to minister at churches and gospel events in cities across the United Kingdom. In 2016, after recording several cover songs on YouTube, God finally made it possible for Abigail to start producing and releasing original songs.

Over the years, she has served in her father’s church, as a song leader and has often led small choirs and groups. She evangelised and ministered at outreach events such as Rugby Festival of Culture and Jesus Loves Leicestershire.

Have a listen, and let this be a source of encouragement to you that your destiny will come to pass as He orchestrated it.