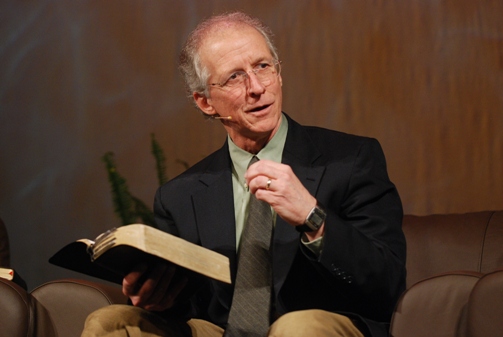 John Piper has clarified the difference between “foolishness” and “sin” according to the Bible and explained that Scripture talks frequently about “foolishness” to show “just how stupid sin is.”

Piper then provided a sampling of biblical texts about the fool or folly, and then drew out some inferences about its relationship to sin. Among others, he cited Mark 7:21-22, “From within, out of the heart of man, come evil thoughts, sexual immorality, theft, murder, adultery, coveting, wickedness, deceit, sensuality, envy, slander, pride, foolishness”, and Psalm 14:1, “The fool says in his heart, ‘There is no God.'”

Based on these verses, Piper said he believes that foolishness in the Bible is always sinful.

However, Piper contended, this does not mean sin and foolishness, are identical, or that calling someone a sinner and calling him a fool are saying the same thing.

Ultimately, the Bible uses the “foolishness” to show just how stupid sin is, Piper said.

“Foolishness and wisdom are words in the Bible in application to people to show that goodness and holiness and righteousness are smart, rational, shrewd, wise,” the “Don’t Waste Your Life” author said.

He concluded: “You might say calling something sin means it displeases God and calling it foolish means it’s going to displease you in the end. Sin shoots God. Folly shoots yourself. Sin opposes God. Folly opposes yourself. Since opposing God is suicide, all sin is foolish.”

Piper’s thoughts on sin and foolishness come just after Barna and Summit Ministries released a study revealing that only 17 percent of Christians have what the researchers consider a biblical worldview.

Barna defines a “biblical worldview” as: “believing that absolute moral truth exists; the Bible is totally accurate in all of the principles it teaches; Satan is considered to be a real being or force, not merely symbolic; a person cannot earn their way into Heaven by trying to be good or do good works; Jesus Christ lived a sinless life on earth; and God is the all-knowing, all-powerful creator of the world who still rules the universe today.”

Brook Hempell, senior vice president of research at Barna, said this about the findings: “The challenge with competing worldviews is that there are fragments of similarities to some Christian teachings, and some may recognize and latch on to these ideas, not realizing they are distortions of biblical truths. …

“Informed thinking is essential to developing and maintaining a healthy biblical worldview and faith as well as being able to have productive dialogue with those who espouse other beliefs.”

John Piper is the chancellor of Bethlehem College & Seminary in Minnesota and the founder of Desiring God.