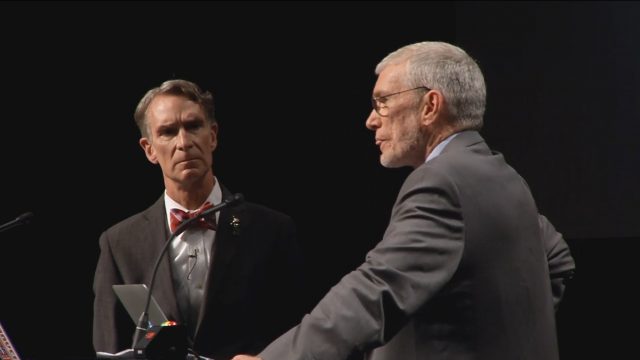 Ken Ham, founder, president, and CEO of the creationist organization Answers in Genesis, Creation Museum, and Ark Encounter, has once again issued a stinging criticism of Bill Nye “The Science Guy” over his views on climate change.

“Here is Bill Nye again accusing those who reject his version of climate change as climate-change deniers,” Ham began a lengthy Facebook post published Sunday, linking to a Washington Examiner article which quotes Nye as saying that generationally, the majority of “climate change deniers” are older.

“He continues to accuse me of being a climate-change denier, too,” Ham continued. “Personally I don’t know anyone who is a climate-change denier–but there are a lot of people who recognize that climate change is a complicated issue and can be interpreted differently. For instance, if one (like Bill Nye) rejects biblical history, then that person will not recognize that the Fall and the Flood have greatly affected how climates change.”

In the article, Nye also says that climate science will start to advance when old people start to “age out.”

“We’re just going to have to wait for those people to ‘age out,’ as they say,” Nye said, adding that “age out” is a euphemism for “die.” “But it’ll happen, I guarantee you – that’ll happen.”

Ham accused Nye of “decrying the older generation” with his comments.

As earlier reported, Nye previously came under fire when, on the season finale of his Netflix show, “Bill Nye Saves the World,”  he suggested that American families ought to be penalized for having “extra kids” as a solution to overpopulation and climate change.

“Bill Nye might think he’s the savior of the world, but I’ve got news for Bill Nye: Jesus is the Savior of the world,” Ham said, quoting John 3:16 – “For God loved the world so much that he gave his one and only Son, so that everyone who believes in him will not perish but have eternal life.”

He added, “The Bible makes it clear – we can’t save ourselves, we had to have someone come and save us because we’re sinners.”

The pair first debated at the Creation Museum back in 2014, and deliberated again last year during a tour of the Ark Encounter.

Ham told GH that during their two-hour conversations at the Ark Encounter, he asked Nye: “What happens when you die?”

“He told me, ‘When you die, you’re done,'” Ham shared. “[I said], ‘Ok, then what’s the purpose of even living? Because if you die when you’re done, you won’t even remember you were here.’ He said, ‘We might make some great scientific advancement for these young people.’ I said, ‘Yeah, but when they die, they’re done, and they won’t even know they were here.'”

He added, “What’s the point of you even fighting with Creationists like me if, when you die, you’re done and won’t even remember you were here?”