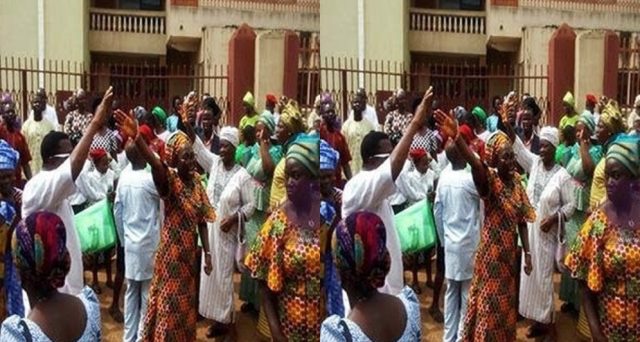 Members of the Ajegunle Baptist Church, Agbowo, Ibadan locked up the church after allegedly being fed up with the pastor’s financial impropriety and improper behaviour, causing Sunday Service to be held outside the Church’s gate.

The aggrieved members under the umbrella of “Concerned Members”, are insisting that church pastor, Reverend Oyewole Oyekan leaves the church on allegations of unilaterally running the financial affairs of the church and banking the church’s money to the tune of over N4 million in his personal account.

“We reported him to the association, conference; all they were doing was to appeal to us to give peace a chance. We have proved it beyond reasonable ground and we want him to leave our church.”

The crisis had begun about three years, when the group had forwarded their grievances to the Nigerian Baptist Convention, asking that Pastor Oyekan be axed after over 15 years of being in charge.

The crisis had begun about three years, when the group had forwarded their grievances to the Nigerian Baptist Convention, asking that Pastor Oyekan be axed after over 15 years of being in charge.

The Nigerian Baptist Convention, in a letter dated December 20, 2016, signed by Reverend D.O.E. Madoghwe, had then confirmed financial misapplication by Reverend Dr Oyekan, though noted there was no embezzlement.

The convention however ruled that the pastor should not keep church money, rather should allow the finance officers to do so, and mandated him to follow the proper channel of handling matters in the Baptist denomination from local church to association, conference and the convention.

Speaking on the allegations against him, Oyekan described the allegations as false, noting that no report of the auditor, financial secretary, treasurer or church in council had indicted him of embezzlement.

“Every quarter, we report everything to the church, the auditor’s report, the financial secretary report, treasurer report, and none of such reports has ever indicted me for anything. The hidden agenda is that I have been here for 18 years, and they want our members to go so that they can share the properties of the church. In the Baptist church, we don’t do that. They claim to be foundation members. We have people who have been year for over 20 years, who are said to be visitors.”

Speaking, a member of the church, Dr Adesina Sunday said the “Concerned members” against the Pastor because he stood for the truth and never allowed them run the affairs of the church as a cabal.

“These people called concerned members are not recognized by the church. In Baptist church, it not a group that employs or fires a pastor, it is the entire church. They have hidden agenda. The issue started when the pastor suggested that the name of the church be changed. The school account was audited and it was not discovered that there was N1. 7 million, it was the pastor that revealed that there was N1.7 million. But by an arrangement of the church, the money was returned.”

“Another grouse is that they don’t want the pastor because he preaches the truth. The convention said the pastor was guilty of misapplication though there was no embezzlement. They are telling lies against the pastor,” Adesina said.

Secretary of the church, Deacon Oladosu Olusola, said the agitators should rather follow due process in advancing their agitations.

“Whatever issues anyone might have, they should follow due process by bringing them to the church in conference. At the church, the issues were debated and if the decision of the entire church is that the issues they brought are valid, so be it. But they should not use self-help, bypass procedures and force their opinions on the rest of us,” Olusola said.