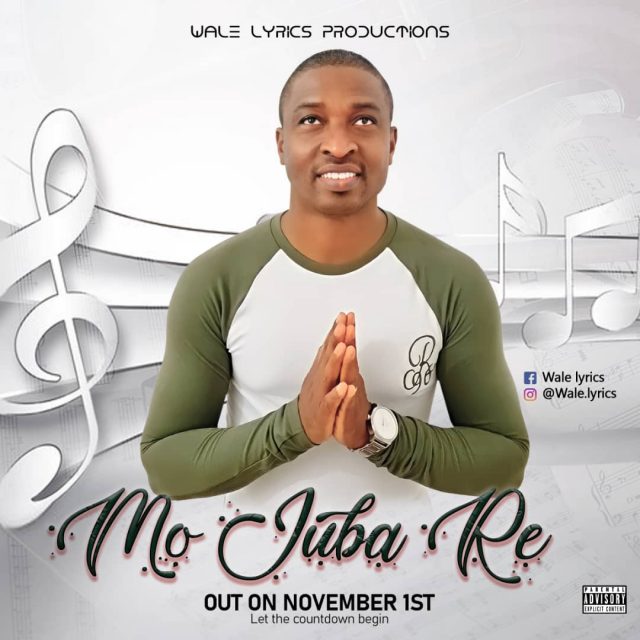 The Nigerian music industry has once again birthed another ingenious gospel artiste. Popularly known as Wale Lyrics Adewale Fowe, Released a New Single Titled Mojuba, Which is a Powerful Song That Will Uplift Your Spirit. Mojuba is an inspirational worship song which testifies of God’s unfailing love. In his words, “The song came from the depth of my heart to appreciate God’s faithfulness”.

When you think there is no reason for you to give thanks to God
Think about gift of life Wale Lyrics who hails from Ido Ekiti, is the new sensational gospel singer who has warmed his way into the heart of every gospel music lovers here in Nigeria and Abroad.
Adewale was born and bred in Lagos- Festac specifically. Educationally, he started his primary school at 7th Avenue primary school, Festac and he proceeded to Festac grammar school. He studied theatre art in the prestigious university of Lagos,where he was known as a prolific pianist as
he played to entertain his fellow students.

Furthermore, his musical career began in church like some of his
counterparts. As an organist in his church, he would compose songs rendered by his church choir on different occasions especially during special events such as the choir anniversary.
This continued as he left the shore of the country for greener pastures in the UK. Still in his church in UK where he was the choir master, he was invited by several members to sing at different occasions because of his versatility and creativity in music.

Although Wale Lyrics started singing professionally over a decade ago, his first album was produced in 2018 titled “Iyanu loro re” (Miraculous God) produced by Seun Oseren with Four tracks.This album which would have become the talk of the town but for the COVID-19 pandemic which crept in and affected the promotion of the song. Ultimately in 2021, he released another single titled”Mojubare” (I worshipyou) produced by one of the Nigerian best gospel producer Sola Williams.

The reception of his music has been very great both at home and abroad as testimonies abound of how his songs have blessed them tremendously. As a composer, his dexterity in music has a positive effect on his compositions as testified by his fans.
While discussing his major challenges in the Nigerian music industry, he lamented the lack of encouragement by fellow artistes for upcoming artistes, inability to get the right people to work with and truthfulness.

Adewale likes the songs of Yinka Ayefele,Tope Alabi, Alaseyori and late Sony Okosun. He enjoined all gospel artiste to be united and support one another to the top; equally, he advised upcoming artistes not to give up but to work hard and be hopeful.
Finally, he enjoined all his fans to listen to his new single as they will surely embrace the art of worship the more. “Wale Lyrics” definitely is the new sensation in the industry.