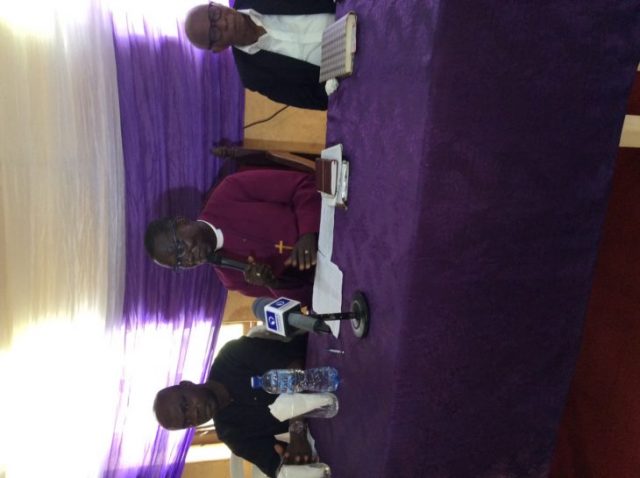 The Archbishop of Kwara Province and also Bishop of Igbomina Diocese of the Church of Nigeria, Anglican Communion, the Most Revd. Michael Akinyemi has lamented the dearth of leadership in Nigeria pointing out that the country has been unfortunate not to have a selfless leader in its 57 years of existence.

While noting that there had been some leaders who had done well for their regions and states in the past; he said the country is yet to have a leader at the national level that will lead by example.

He made the observation at a press conference today (October 2) at the Cathedral Church of St. Michael, Esie, Kwara State; to mark the end of his service in the Church of Nigeria.

According to the Church Times Nigeria, Akinyemi will formally retire from the church on October 17 when he will clock 70 in accordance with the constitution of the Church of Nigeria.

He will be succeeded at the Province level by The Most Revd. Olusegun Adeyemi, a medical doctor and also the Bishop of Kwara Diocese while the Rt. Rev Emmanuel Adekola will take over from him at the diocese level.

Akinyemi at the press conference which was attended by priests and some notable figures in the diocese including the chancellor of the diocese, Mr. Tunji Oyeyipo and Professor Timothy Afolayan said experience over the years have shown that Nigeria does not have leaders that are sacrificial, who lead by example and who have concern for people at the grassroots.

“I personally think what has been happening in Nigeria for several years have been selection not election. One bad leader is just handing over to another bad leader while those who are capable of leading us aright are being intimidated when they see the attitude of money bags.”

While recalling the era of the early sixties, Akinyemi who explained that the restructuring of individuals is more crucial than fiscal or geographical restructuring said,

“in those days’ members of parliament were only paid sitting allowance. They still maintained their jobs. So there was nothing for them to steal at the centre even if they wanted to steal because the law does not provide that opportunity.”

He however maintained that restructuring of Nigeria will make no meaning if the same characters ruling Nigeria are the ones at the helms of affairs.

He also took a swipe at church leaders who live ostentatious lifestyles noting that Jesus did not encourage such lifestyle while he was on earth. He lived and preached a simple lifestyle.

“Bible is against ostentation. You can’t drive more than one car at a time. So there is absolutely no need keeping a fleet of cars in your garage which you may never touch for years. We don’t need many of the material things that we hang around ourselves. Church leaders should endeavour to live a simple lifestyle.”

Akinyemi who is the pioneer Bishop of the diocese of Igbomina seized the opportunity to share his experience in the diocese. He said,

“When I was preferred Bishop and asked to come to this diocese, I did not even know where Igbomina was located. The then Bishop Olajide who is a father to me broke the news to me.

“I did not know where Igbomina is so coming to Igbomina was quite challenging. But he encouraged me to go pray about it which I did. I later had to come trusting that God would help. And indeed he has helped us hold forte since we came in 1999.”

He said the entire money he met on ground at inception was N34, 000 pointing out however that he had to call a one-day synod asking for an adhoc budget of N500,000 to run the diocese.

Since that time, it has been from one glory to the other. He said, “I declared to the people that I am a Bishop on the move. We embarked on crusades and evangelism in the whole of Igbomina. We were doing crusade every week from one place to the other. The Lord strengthened us and so far I can say the efforts have paid off. The Lord has enabled us to add 14 more churches to what we met on ground despite the fact that this area is populated mostly by people who don’t stay in town. This diocese is a diocese in the diaspora. Many of our members are in Lagos, Ibadan and Abuja.”

He said God has also enabled him to introduce some investment projects to the diocese which has paid off regretting however that some of his suggestions for investment were not approved by the Synod of the diocese.

He expressed great appreciation and thanks to members of the diocese who sacrificed greatly to make the diocese what it is today.

“I can’t forget how many people helped us and how people donated to the various projects that we have on ground. We have been able to do some investment especially the sachet water business because people supported it.

“The Bishop’s court was built largely from the proceeds from the bishop’s court and support from individuals and friends. Some members have also been a blessing to us. We are indeed grateful for the love and support we enjoyed during our stay in the last 18 years.”

The chancellor of the diocese, Mr. Tunji Oyeyipo; a Senior Advocate of Nigeria said at the conference that the greatest achievement of the retiring Archbishop is the impact that God used him to make in the lives of people.

“He is so passionate about his parishioners. He knows them and he knows their challenges. He is always willing to help. God has used him tremendously for me particularly and many other people. He perhaps has forgotten. But it was a year after he prayed for me when the diocese gave me an award that I became a Senior Advocate of Nigeria.  He relates with virtually everybody irrespective of their status.”