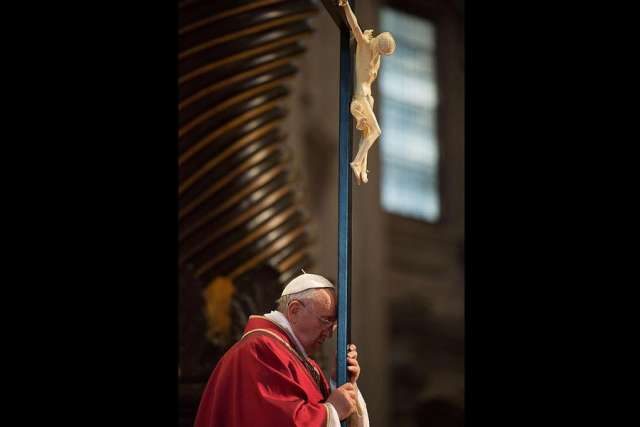 On Wednesday, Pope Francis offered prayers for the more than 300 victims of a terrorist bombing in the African country of Somalia, one of the most lethal attacks to take place anywhere in the world in recent years, the Catholic News Agency reports.

“I would like to express my sorrow for the massacre that occurred a few days ago in Mogadishu, Somalia,” the Pope said Oct. 18. “This terrorist act deserves the most firm censure, because it ravages a population that has already been so tried.”

The attack took place Oct. 14 when a truck packed with explosives blew up in front of a hotel in the Somali capital of Mogadishu, killing more than 300 people and injuring hundreds, including children.

Responsibility for the bombing has yet to be claimed by any group, though some Somalis have reacted to the attack by condemning al-Shabaab, an Islamist militant group associated with al-Qaeda.

In his appeal, Pope Francis said he prays “for the dead and the wounded, for their family members and for all the people of Somalia,” and also offered prayers “for the conversion of the violent.” He also encouraged “those who, with great difficulty, work for peace in that tortured land.”

Pope Francis made his appeal at the end of his weekly general audience in St. Peter’s Square. In his address, the Pope spoke about the inevitability of death, saying it’s good to meditate on our eventual passing.

As a piece of advice, he told pilgrims to recite Psalm 90, which asks to be taught how “to count our days and acquire a wise heart.”

These words help to give us a “healthy realism, casting off the delusions of omnipotence,” he said, asking: “What are we? We are ‘almost nothing,’ says another psalm; our days are running fast.”

He noted how many times he has heard older people speak about their life, saying it “passed like a breath.” Death brings our life into focus, showing how all our pride, anger and hatred is ultimately vanity, he said.

“We realize with regret that we have not loved enough and did not look for what was essential. And, on the contrary, we see what we have really sowed: the affections for which we have sacrificed ourselves and who now hold our hand.”

But faith gives us hope, he said, explaining that “we are all small and helpless in front of the mystery of death. However, what a grace if we keep the flame of faith in our hearts!”

Francis noted that Jesus, by his life and death, illuminated the mystery that is death. As an example, he pointed to the New Testament, when Jesus weeps after learning of the death of his dear friend Lazarus, showing us that it is okay to mourn the loss of a friend.

But then Jesus prays to the Father, the source of life, and orders Lazarus to leave the tomb: “and so it happens.”

This is a source of Christian hope, he said: that though death is a part of life and is present in creation, it is “an affront to the design of God’s love, and the Savior wants it to be healed.”

In another Gospel episode, there is a father with a very sick daughter who addresses Jesus with faith, asking him to save her, the Pope recalled. But then, someone comes out from the man’s house to tell him it is too late, his daughter has died.

“Jesus knows that man is tempted to react with anger and despair because of the child’s death, and advises him to guard the small flame that is lit in his heart: faith.”

“Do not be afraid, only have faith,” Jesus says to the father, telling him that when he arrives at home, he will find the child alive.

Also in his words to Martha, as she weeps for the death of her brother Lazarus, Jesus teaches us that he is “the resurrection and the life; whoever believes in me, even if he dies, will live.”

These words are repeated to us every time death comes in order “to tear the fabric of life and affections,” Francis said, adding that “all our existence is played out here, between the side of faith and the precipice of fear.”

Jesus is the resurrection and the life, the Pope said, asking pilgrims: “do you believe this?” He then invited those present in St. Peter’s Square to close their eyes and think of the moment of their death.

Think of your death and imagine the moment when Jesus will take you by the hand and say, “come, come with me, get up,” he said. Jesus will come to each of us, taking us by the hand “with his tenderness, his mildness, his love.”

“This is our hope before death,” he concluded. “For whoever believes, it is a door that opens wide completely; for those who doubt it is a glimmer of light that seeps out of a door that has not closed completely.”

“But for all of us it will be a grace when this light illuminates us.”