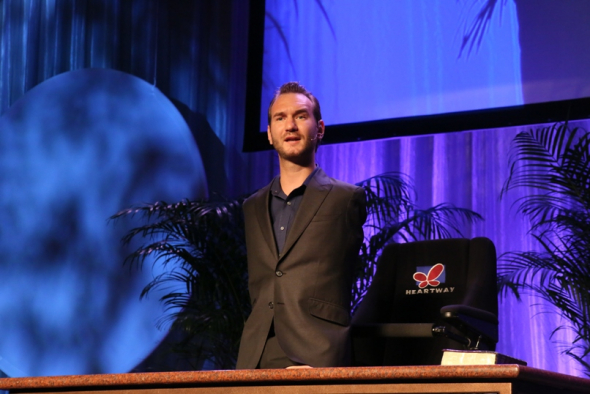 Famous evangelist Nick Vujicic said his team witnessed 400,000 people repent for their sins and choose to follow Jesus Christ at a recent event in Ukraine. That was the largest response that the Life Without Limbs ministry has seen, the Christian Post says.

“The biggest event that our team at Life Without Limbs has seen and maybe the largest event ever in Europe – 800,000 people in the streets of Kyiv Ukraine! Thank you God,” Vujicic wrote on Facebook on Tuesday.

“400,000 repented of their sins and began their spiritual journey with Jesus – Now LWL celebrates the witness of 1 million decisions to walk with and trust God in everything face to face,” he added.

Nick Vujicic, who was born with no arms and no legs, has inspired millions around the world through his ministry, and has gone on numerous world tours inviting people to follow Christ.

The evangelist also made a stop in Russia during his most recent trip, where he stayed for 40 hours.

“Unfortunately I wasn’t able to meet the President this trip but we continue to plant seeds of love and hope across this country until some unique doors open to share – thank you for your support,” he wrote in an update.

Protestant Christians have held several large events in Ukraine. In September, over 500,000 of them took to the streets in Kiev to celebrate the 500th anniversary of the Protestant Reformation.

Sergey Rakhuba with Mission Eurasia said at the time that the Ukrainian Church has not allowed the ongoing conflict between Russia and Ukraine to slow it down.

“It was so exciting to see on the screen of my computer where I was watching young people with so much joy. They glorify God in the midst of their capital. This was the same place where they were protesting just a few years ago fighting for their freedom. But also this is the place where many years ago, communists would force people to demonstrate and propagate socialism, atheism, communism, and other ‘isms’ in their country.”

Nick Vujicic visited Ukraine and other Eastern European nations on his European tour there last year as well.

In one video, he talked about meeting Borut Pahor, the president of Slovenia:

“I just finished a meeting with the president of Slovenia, it was a wonderful encouragement and an enriching time. Tomorrow I will be speaking in front of students here in Slovenia, so please pray for us, and thank you for your love, prayers, and support,” the evangelist said then.