Some days ago the social was agog with the story of one Jesus who was invited to Kenya telling the Christians there he was Jesus and that this is his second coming, we showed that this story was not infact true, and that the person in question is Michael Job, an Evangelist and actor who many times played the role of Jesus in films.

Just immediately after debunking these lies, then people came up with yet another misleading and vicious lie that he had been deported and the Pastor who brought him arrested as well. Just as the first was a lie, this also is a lie. This had become so widespread that not only was this posted on blogs and News outlet online, but was also broadcast on some TV stations.

Just yesterday, Michael Job posted on his facebook page of how he noted this lie has been spread about him and that he is still in Kenya doing the Lord’s work, he stated;

Hey guys! Just to let you know there has been many false “fake news” reports here in Kenya about me. I just did 9 days of crusades in Ongata Rongai, Kitengela, and Kiserian Kenya where many people were saved and healed. I dressed up as Jesus during these crusades my awesome friends and I performed many plays focusing on the life of Christ.

Some people, known as “internet trolls”, have made false reports about me claiming to be Jesus, Jesus’ second coming starting in Kenya, me being found and worshipped in churches, and me being deported with pastors from the country, all of which are “fake news. ” I have gotten many messages and just wanted to let you know I am still here in Kenya, preaching in schools, hundreds of children are making decisions for Jesus every day.

This morning many students surrendered their lives to Jesus, and we are going to the next school right now. Thank you for praying for us, also please do not pay any attention to the “fake news” or any attention to the media publications of which posted these things. May the Lord abundantly bless you! 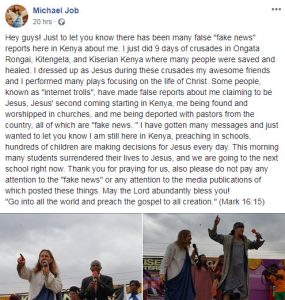