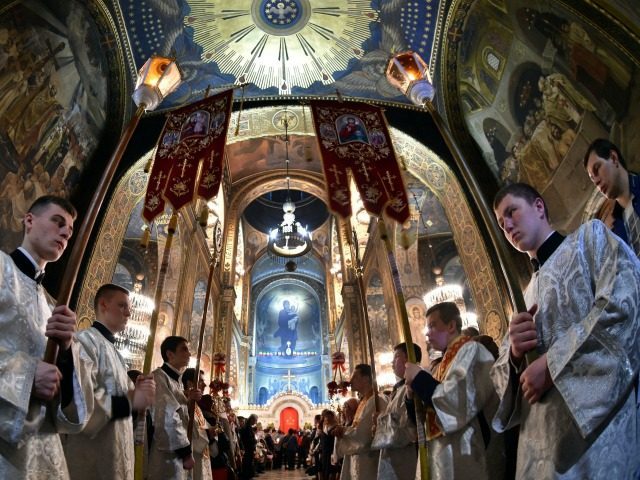 Report: Despite Crackdowns on Religious Freedom by the Government, Atheism in Russia Falls by 50% in Three Years

The number of Russians who identify as atheists has fallen by 50 percent in just three years, according to a recent poll by the Levada research center.

The poll, which was conducted in late June, revealed that the number of Russian atheists, or those who consider themselves “absolutely irreligious,” fell sharply from 26 percent in 2014 to just 13 percent in 2017.

Religious believers now make up 86 percent of the population, the survey found, with 44 percent describing themselves as “quite religious,” 33 percent as “not too religious” and 9 percent as “very religious.”

Levada, a non-governmental Russian research center, conducted the survey on a representative all-Russian sample of urban and rural population among 1,600 people aged 18 and over in 137 settlements in 48 regions of the country.

Unsurprisingly, the poll found that Orthodoxy remains the dominant and most popular religion in Russia, and more than 92 percent of respondents view the Orthodox church with “respect and benevolence.” Regarding Catholics, 74 percent of Russians views the Catholic church with “respect and benevolence,” while 10 percent have “conflicted feelings” toward Catholics and another 5 percent look on them with “dislike” or “fear.”

Fifty-nine percent of respondents hold a favorable view of Islam, while 17 percent have “conflicted feelings” toward them and 13 percent look on Muslims with “dislike” or “fear.”

The poll furthermore seems to indicate that anti-Semitic sentiment is falling in Russia, as the number of those who say they either “dislike” or “fear” Jews has dropped significantly, from 15 percent in 2014 to 11 percent today.

The portion of the population that backs the Orthodox Church’s involvement in state politics has risen slightly– from 26 percent in 2014 to 28 percent today, while the majority (58 percent) say that the Church should not influence political decisions.

“This practically means the imposition of political censorship and the impossibility of independent polls. It’s the typical behavior of this repressive regime,” he said.

All the other main polling centers in Russia are government controlled.