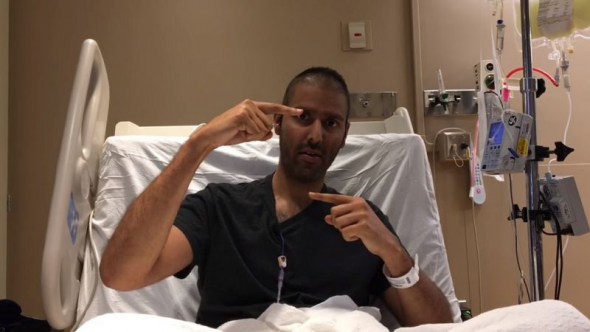 Cancer-stricken apologist and author Nabeel Qureshi has been hospitalized for the better part of the last three weeks after mesh tubing that was supposed to help him eat got dislodged and stuck in his throat.

In a Facebook post Tuesday afternoon Qureshi, who was diagnosed last year with advanced-stage stomach cancer, explained that he is still in the hospital after checking into the emergency room on July 21 because of a dislodged stent in his esophagus.

“I’m still in the hospital. Day 19! Please continue to pray,” Qureshi, who served with Ravi Zacharias International Ministries before he was diagnosed last summer, wrote in the social media post.

Qureshi also apologized for not updating his followers more frequently about his medical situation.

Qureshi, who is now living in Houston, Texas, with his family, announced on July 23 through his Facebook page that he was hospitalized after a dislodged stent caused was he described as the most painful experience of his life.

On July 28, Qureshi recorded the 38th edition of his video blog from his hospital bed and explained he was still in the medical facility even though the stent that was causing the pain had been removed about five days earlier. Qureshi explained in the video that he expected to be released from the hospital just a few days later.

“At this point, we have been in the hospital a whole other week. Again, some paperwork, some red tape, trying to get transferred, blah, blah, blah,” Qureshi said in the video.

In his July 28 video, Qureshi said the stent was originally inserted on July 20 after he consulted a doctor about the fact that he had not been able to eat for the past few weeks and had lost about 20 pounds.

Although the stent was supposed to help prevent blockages in the stomach, it got dislodged the next morning and traveled all the way up into Qureshi’s esophagus, where it expanded.

“If you can imagine a 14 centimeter mesh tube stuck in your throat, that is what was going on,” Qureshi said. “I was just vomiting blood as we were trying to make our way to the ER. While I was in the ER, I was in excruciating pain. I have never felt or imagined pain like this before. It was internal, as if something inside me was trying to explode out.”

On July 31, Qureshi went in for laparoscopic surgery to get the J-tube placed.