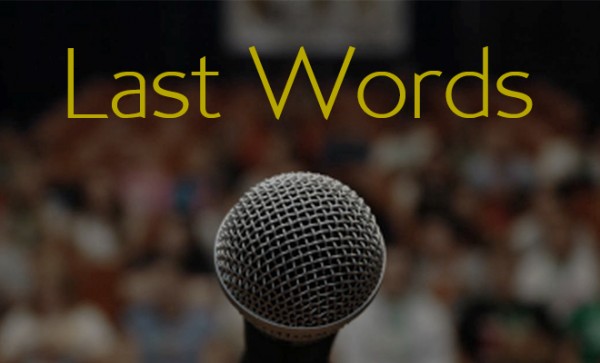 We can learn a lot about what’s most important to a person by pondering his last words. In this video, David Wood discusses the parting thoughts of Jesus, Muhammad, and Nabeel Qureshi.

Jesus said in Luke 23:24 ‘Father forgive them, for they do not know what they are doing.’ “This is the same Jesus who said You have heard that it was said, ‘Love your neighbor and hate your enemy.’ 44 But I tell you, love your enemies and pray for those who persecute you, 45 that you may be children of your Father in heaven. He causes his sun to rise on the evil and the good, and sends rain on the righteous and the unrighteous,”” says David.

“He asked the Father to forgive people who had tortured, mocked and crucified him.”

So, what about Muhammad’s final message? “We get to Muhammad who was poisoned by a Jewish woman whose family had been slaughtered by Muslims. Muhammad didn’t swallow enough poison to kill him quickly, but the poison did cause internal damage leaving him in ever-increasing agony,” explains Wood.

Then, Wood comes to the last words of his best friend, Nabeel, who converted from Islam to Christianity.

“We can see the impact Jesus had on Nabeel in his last recorded words. Nabeel’s internal organs were riddled with cancer, his stomach removed,” explains Wood. “The doctors had given up on him and had stopped feeding him. He understood that they were just going to keep him heavily drugged until he died. This was his last chance to share something with the world, and what was his concern? He wanted everyone to know something about the God that he served.”