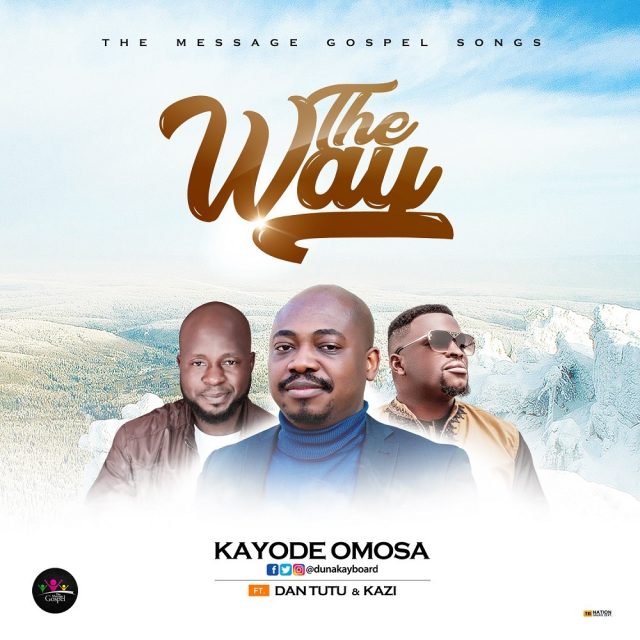 Some things are loud in the bible while some are silent and some others don’t even exist. In John 14:6 Jesus said in clear terms “I am the way, the Truth and the Life. No one comes to the father except through me”. This statement of Jesus was so loud that even many years after the ascension of Christ the apostles were nicknamed “People of The way”.

He is not the pointer or maker of way, He is The way. He doesn’t have truth, He is The truth, He doesn’t have life of God, He is The Life. So we are not looking for the way, the day Jesus came into our heart, The way entered and we rest in Him for ever.
This amazing track also features the major languages from Nigeria – Igbo, Hausa & Yoruba respectively. Song written and arranged by Kayode Omosa, sequenced by Ebenezer Iremi, featuring Kazi (Igbo verse) and Dan Tutu (Hausa verse) while English and Yoruba verses were done by Kayode Omosa.
Officially released on The Message Gospel Song platform, powered by Dunack Music 2011 production.

Sing and lend your voice to the loud message – “The way, The truth, The life JESUS…”

CHORUS
The Way
The Truth
The Life
JESUS

(VERSE 2 IGBO LYRICS BY KAZI)
Ozi ifunanya Chukwu gosiri uwa
(The message of God’s love for the World)
Ya ka anyi na agbasaghari n’uwa
(That is what we a telling the world)
Inukwala ikwetekwala
(Have you Heard, Have you believed)
Nwe kwala ndidi m’akowakwala
(Please be patient and I will explain)
Mary nwanyi oma, nwata nwanyi n’amaghi nwoke
(Mary a virgin woman, who knew no man)
Turu ime si nike nke mmuo nso muta nwa, nwa nke mmuo nso
(Conceived by the power of the Holy Ghost and brought forth a child of the
Holy Ghost)
Akporo ya Jesu Okpara Chukwu, Nwachukwu, okwuchukwu
(He was Name Jesus, the Son of God the son of word of God)
Ima na ifu jesu ifugo Chukwu, nwa aturu Chukwu
(if you saw Jesus you have seen the father, he was the Lamb of God)
Obi n’igwe gbadatara nu n’ime uwa
(He who dwells in heaven came to the earth)
Maka ikpo chapu njo ndi uwa
(To take away the sins of the World)
Okwu emere aru, ha meruru ahu kpo gbuo ya n’elu obe
(The word that became flesh, they wounded and nailed to the cross)
Ekwensu che na okwu agwula mgbe ha tinyere ahu ya n’ime ala
(The Devil though that it was over when Jesus was buried)

Mana abali ito omere ya voom n’anya
(but three days after he was he was taken unawares)
Christ rose again from the dead; Christ is the way to the father
Nwanne ikwere, ndu ebighebi bu nke gi.
(Brother if you believe this message, Eternal life is yours)

(VERSE 2 – HAUSA LYRICS BY DAN TUTU)
Shi ya mutu Domi na, Mai ceto, hanyar Rai
He died for me , my savour ,he is the way to eternal life
Ya Sha wahala Domina, Mai famsa, Shi ne gaskiya
He suffered for me , my rewarder , he is the truth
Yau na Sami salama , har abada , har abadin,
Today I have peace , that endures forever and ever
Yesu…. Hasken duniya …