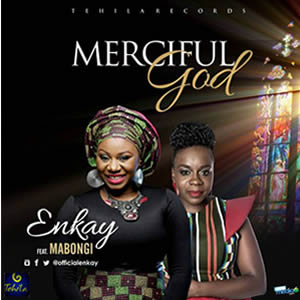 Tehila Records first lady, Nkiruka Ogboruche popularly known as Enkay and South Africa’s soulful crooner Mabongi, are taking gospel ministration to all of Africa with their collaboration in Merciful God, the latest single by Enkay.

Mabongi, signed on to FavourNT music South Africa  is a multiple award winning gospel minister with awards that include Best Female Gospel artiste (INGOMA Award 2015) and the Best Songwriter at the Mzansi Gospel Award.

Merciful God, a mid-tempo African praise song done in English, Nigerian (Igbo) and  South African (Tonga) dialects, is subtitled for a global audience. Produced by Mayo, it is been released at the same time with its video shot in South Africa.

With the new single, Enkay consolidates on the success of The Kingdom Anthem, her well accepted debut album, entrenching her niche for ministering through songs that are rich in God’s words and revelations.

What’s more? The message laden video of Merciful God inspires honesty by showcasing it as the best and most rewarding option even in the face of temptation and challenges and evokes the deep message of the Mercy of God that is beyond human understanding. Enkay subtly provides Africa’s teeming population with a moral compass setting herself apart as a minister of Christ’s pristine gospel.

Commenting on the new single, Merciful God and its music video, Nigeria born Enkay, who is also a song writer, said “It speaks to my mandate to use the boundless power of music to promote the saviour’s way and to teach His plan of salvation in a memorable way. And there is no better time to provide a moral compass for Africa than the present challenging times we live in”.