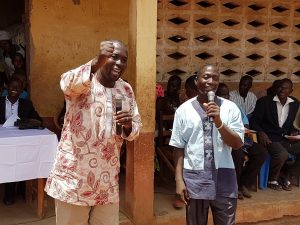 When you abandon your own ideas of what is possible, God can use you in amazing ways. This is the testimony of OneWay Ministries as they labour in Ghana, MNN reports.

OneWay Ministries has been working in the West African country for nearly 20 years, planting churches, providing leadership training, and helping with community development.

“This year we have a goal of reaching 50,000 people in 10 least-reached people groups, and we’re trusting in the Lord for at least 10,000 decisions for Christ,” Ray Mensah, director of OneWay Africa, says.

“Then we’re looking at 60 churches being planted, new churches, and we started a disciple-making movement, where we’re seeing groups multiplying, disciples making disciples. We have 64 groups so far, and we hope it to multiply to about 200 by the end of the year.”

The road won’t necessarily be easy, though. Mensah says their team faces multiple challenges, such as lack of financial resources, lack of access to remote villages, and the growth of Islam.

“We’ve had places where they will be very open,” Mensah says. “We’ve seen some chiefs, we’ve seen some families come to the Lord.”

“There’s a lot of fruit among them, and so we are hopeful. We are not scared, we are not afraid. We just trust God and we have to do what we have to do, and it’s fantastic what God is doing.”

There’s a great spiritual harvest in Ghana. Can you come alongside OneWay as it seeks to reap this harvest? Mensah asks that you pray that God would protect OneWay’s work and that the Church would remain passionate about reaching the lost.

“We still have a number of least-reached people groups, at least 18,” Mensah says.

“May the Church rise up, [provide] all the resources– the human resources, the financial resources– so we can also reach other West African countries. So we pray that the Church would be really awakened to that call.”