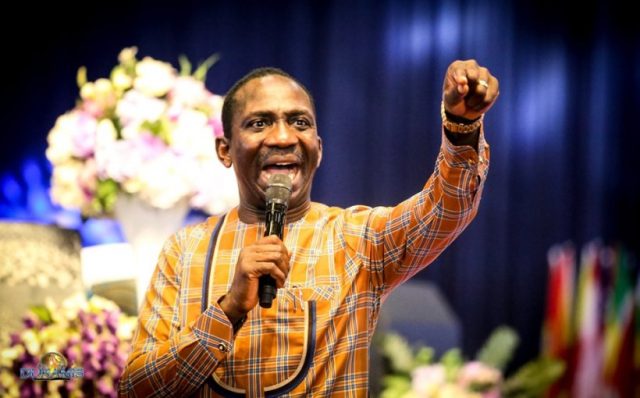 We bring you greetings in Jesus’ Name.

We are in a season that calls for sober reflection in the light of the passing of our beloved sister, Osinachi Nwanchukwu who is a kingdom and generation asset to this generation. In the light of so much misinformation and misconstruction of events, I decided to set straight what I know concerning the situation. Over two and half Months to Three Months ago, she came to see me with her husband with complainants of chest pain, respiratory distress. I prayed for her and prayed and prayed again. And when the symptoms did not abate, I counseled that they go to the hospital to help us to know exactly what we were dealing with. They asked if I could help them assist facilitate that process. I called our head of medical team, Dr Osang who is consultant pediatrician with the Federal Medical Centre, Keffi to assist handle their situation. And he called the Federal Medical Centre, Jabi, he called colleagues there where they attended to them. On seeing her, ordered some investigations after examinations and that included CT Scan (Computed Tomography Scan).

That was done, and from what the Doctor saw, they said there was need for further investigations either at the University of Abuja Teaching Hospital or the National Hospital in Abuja. I called the Doctor, consultant, A pulmonologist Respiratory Physician at the University of Abuja Teaching Hospital, Dr Akor Alexander, I told him the situation and he asked they come to see him immediately. And they went to the Gwagwalada Teaching Hospital. After they have examined her there and saw the situation, they felt there was a need for histology and biopsy of the Lung Tissue and they asked she goes to the National Hospital to get that done. I again called Dr Jubrin who is the head of pathology and consultant, histopathologist of the National Hospital in Abuja and reported the issue to him and to help us go ahead with the investigation and find out what exactly happened. I am calling names and calling places because the people are available and alive and they are all verifiable.

And then, they continued the management. The histology was done from what I saw at that time. The picture was much milder than what the CT Scan earlier on showed and so we felt very happy that atleast, there was relief. She called me literally daily and prayed with her. She reported progress. A point came where she needed no oxygen anymore according to what she said to me one night. And that they checked her oxygen perfusion and it was 100% and we were very very excited at that progress. That was the point it was before we went over to the Crusade in Cameroon. It was in Cameroon the second night that I got to know of the unfortunate incidence of her passing.

Now, if there was domestic violence that lead to or coincided with those symptoms that she came with two and half month to three months ago, there is no way I would know and if there had been perennial domestic violence, there was no way I would have known. The things we are hearing after her passing were things that were very very strange to my hearing. Then I began to ask questions.

First, I asked the twin sister, are you are aware that your sister passed through all these things. She said yes that she knew some of them. That the majority of them she was hearing from those she confided in. I asked her, I said if you knew, why didn’t you let us know? And the twin sister said, she always begged her, please don’t let the Church know, don’t tell the pastor, please the man will change, just pray for us. That the man will change. And that continued to happen.

I asked the first son yesterday, I said was this real? And the son told other stories. And I said so, why didn’t you tell me because typically they will run to me after service and I will pray for them. Lay hands on them. I said, why didn’t you tell about what was going on in the home? And the young man said, they couldn’t tell me because the father would always asked them after they left me and said, what did you tell the pastor? Did you tell him anything? And so on and so forth.

Other members in the Choir who were privy to these some of the things that were going on. I asked one of them when we paid a visit to the house of the deceased yesterday. What happened, why were we not aware of all these things? The same story that she could always go on her knees and asked them please, don’t don’t, just pray, don’t, we are trusting God for him to change.

The last one that touched me so much was the music producer, who came to see me in the office two days ago to tell me his own experience how he witnessed that the man slapped the wife in his music studio. And I said to him, you saw a man slapped a woman in your presence and you left the man alone and you are a man yourself. And he said before he could respond to the man, the woman again in tears on her knees begged him not to do anything. To leave him alone. And not to do anything at all. And so on and so forth. So, we have had these stories and these are all the things we got to know after she had passed.

As a person and as a Church, everyone who knows us knows that we have zero degree tolerance for domestic abuse and wife battering of any sort. If you ever listen to any of our relationship messages, there is a principle, policy and a rule we have and that is; it is better to be alive without a marriage than to die because of marriage. We’ve said that over and over. I am sure that some of us might have listened to the clips of those messages.

Now this kind of time is the time where people heap all manner of blames on the Church and that is typical because whatever goes wrong, the first point of call is the Church. I have seen people asked questions, why should a wife abuser be a member of the Church or how can somebody be so brutal and he is a member of the Church? That is not a question that people who know Scriptures should ask. You know the Ark of Noah, the same Ark that carried good animals also had evil beast inside the same Ark. You know Jesus Christ had a followership of what the Bible called the multitudes. And for me, multitudes means multiple attitudes; people with multiple inclinations; people with multiple tendencies; people with multiple behaviours. Infact, one of those that followed Jesus Christ was a thief who also sold him to death; he was called Judas Iscariot. Question is, how could somebody followed Jesus Christ as perfect as Jesus was; as instructive as he was; as impactful as he was and still be a thief and a murderer? That question is left for everybody to answer.

And I can tell you the worst of it all; There was personality called lucifer who was in Heaven and became satan the devil under the nose of God in Heaven; a place where there was no sin and could have been no sin at all. This guy became the inventor and the originator of sin. How is it possible for somebody to become a devil from being an Archangel right inside Heaven? That is how possible it is for anybody to be anything while inside the Church. Even the best of pastors, teachers, preachers in the World cannot change any man or woman who is unwilling to be changed. In case you feel frustrated at anything and you are airing your frustration here and there, or a transfer of aggression or frustration, the Church is not your place for transferring frustration and aggression.

We are willing to help you if you have so much bitterness, so much frustration and so much distraction in your life and you don’t know where to vent it but in situations like this, we can help you. I want to let you know that we love you and Jesus loves you. It is well with you and it is well with your loved ones. For the family of the deceased, we pray for strength and help and for the Body of Christ generally, it is well with you in Jesus’ Name.