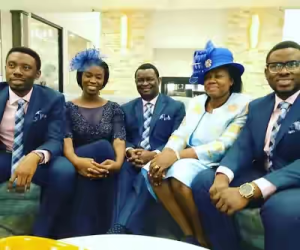 Evangelist Mike Bamiloye and his wife, Gloria of Mount Zion Ministries, have been joyfully married for 29 years now! And To mark the 29th anniversary which held on the 8th of October 2017, they (alongside their three kids) were thrown a surprise party by the Church.

Recounting the events of the past 29years, Mike Bamiloye said, “The mercy of the Lord played out once again, upon our lives, to prove to us, again and again, that the Lord is faithful to all His own. There is no way you can never out-give God. If you are diligent in His service; if you are faithful to your calling; and you are fervent with your visions and mandate, and you have felt on many occasions that the Lord seem not to answer to your many calls, RELAX, HE HAS NEVER OWED A MAN ANYTHING, AND HE WILL ALWAYS PAY YOU BACK, AT HIS OWN TIME.

“Another church where we visited briefly and ministered during the film location brought out a large cake for series of photographs for the Anniversary which was just in few days time. In all, we had cut about three different cakes ahead of the Anniversary date.

“This had been amazing us; that the Lord put our Wedding Anniversary in the heart of people to celebrate with us. However, when a Church sent a message to us that they would hold a big event for the Wedding Anniversary, we never thought it to be what we saw.”