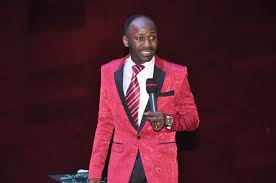 Apostle Johnson Suleman, General Overseer of Omega Fire Ministries International, has joined the list of Nigerians who has decided to come for Femi Adesina over the statement he released to counter CAN’s message to President Buhari.

Following the execution of Rev Indimi by Boko Haram, the Christian Association of Nigeria challenged the president to purge himself of the allegations of nepotism and religious favouritism.

CAN also demand a change in the leadership of the security forces and the release of Leah Sharibu and other captives with the Boko Haram terrorists.

That said, Femi Adesina, presidential aide on media, in a statement released on Friday said the message of the Christian Association showed that the leadership of the Christian body still harbours some of the old narratives that have been discredited.

He also said the Christian Body was acting like a political party and noted that their role was not to be “making snide remarks and statements”.

On the demand for change in the leadership of the security forces, Femi Adesina said, “If the leadership of the security forces would be changed, it is a sitting President that has the prerogative. It will not happen when CAN begins to make such demand in what should be a sober condolence press statement. Don’t mix bias and sympathy. They don’t mesh.”

However, the statement by Femi Adesina has received heavy criticism from Nigerians.

Former Aviation Minister, Femi Fani-Kayode described Adesina as being “morally bankrupt” and Apostle Suleman tagged him as an “insensitive man” while reacting to the statement on Saturday.

Johnson Suleman said: “Just saw the empty defence of Femi Adesina and his lashing CAN over the beheading of Rev Indimi. Such an insensitive man is a presidential media aide?. Certain positions should be given to people who have heads, even if they lack brains, we can manage ‘just head’.”