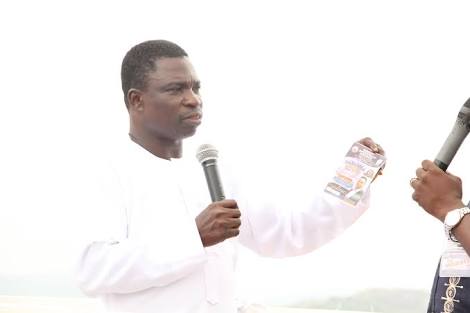 Prophet Hezekiah Oladeji has hinted that his priority as new General Evangelist of the Christ Apostolic Church (CAC) Worldwide would be to sustain the good name of the Church.

Oladeji said this while speaking to a cross-section of journalists at his country home Garage Olode. The cleric disclosed that though he did not lobby for the position, he was not surprised either since he believes God is capable of elevating his true servant to any height.

The renowned Evangelist until his appointment was overseeing CAC, Canaan Land, Revival Centre and Land of Mercy Prayer Mountain in Erio Ekiti State.

Although the cleric acknowledged that extreme poverty in the country is pushing many people to commit evil act, he also promised to stamp out indiscipline among Pastors and Church members.

According to him, any cleric of the church found wanting in areas such as infidelity, fraud and divisive tendencies would be disciplined as appropriate.

This, he said had become necessary so as to stop further dragging of the good name inherited from its founding fathers in the mud.

“Whoever is caught will be dealt with. It is either you change from your old bad ways and remain with us or you make a decision,” he said.

He expressed regrets that so many pretenders nowadays have embraced the work of clergy or gospel music out of lack of white-collar jobs or as a result of business failure and they keep claiming God that called them.

“These are the type of people that often cleverly found their ways into different churches and give such churches  bad names. I will join hands with other leaders of our church to return it to what it used to be.

“It is my conviction that the problems confronting Nigeria are surmountable but the fight against such problems must start from the churches and homes,” he said.

The cleric who predicted that Nigeria would soon regain her lost glory, said he would mobilise intensive prayers towards that direction.

He enjoined Nigerians and the leadership to return to God and make him their cornerstone, for a quick turn-around of the socio-economic challenges.

The new CAC leader called on CAC members and leaders across the world to support his vision and help him achieve his set goals in line with the progress of the ministry.

Oladeji succeeded Prophet Kayode Abiara of the CAC Agbala Itura who retired after attaining the mandatory retirement age of 75 years.