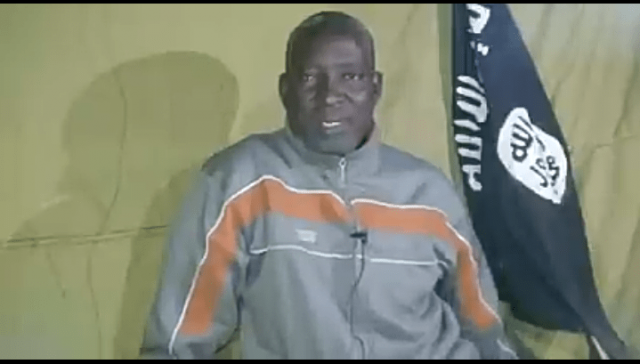 The deadliest terrorist group in Nigeria known as Boko Haram executed Chairman of the Christian Association of Nigeria (CAN) in Michika Local Government Area of Adamawa State, Lawan Andimi.

The news broke through Ahmed Saldika, a Journalist known to have access to Boko Haram.

He tweeted: “To break some news items can traumatize. I’m battling with one of such. Reverend Andimi, abducted by Boko Haram was executed yesterday. Rev. Andimi was a church leader, a father to his children and the community he served. My condolences go to his family.”

It was gathered that Lawal Andimi was declared missing on January 3rd, 2020 after their foiled attack on Michika Local Government in Adamawa State

He was seen in a video pleading with Nigeria authority to facilitate his quick release and also commended his captors for taking good care of him. He also encouraged his family to pray for his release and that if he is not released, it might be the will of God.

Lawal Andimi said, “I have never been discouraged because, all condition that one finds himself is in the hand of God.

“God who makes them to take care of me and to leave my life will still work and he will touch them.

“I’m appealing to my colleagues, particularly my President, and my Governor for my release.

“These people have been doing me well, they provide my every need, they haven’t done anything wrong to me so I believe that God who made them act in such a way to me will make all arrangement for me to leave here.

“By the grace of God, I will be together with my wife and children. If the opportunity is not granted, maybe it is the will of God.

“I urge you all to be patient, don’t cry, don’t worry but thank God for everything.”

President Muhammadu Buhari had responded to a statement by the CAN which accused his government of not doing enough to stop the persecution of Christians in Nigeria.

President of CAN, Rev Dr Samson Ayokunle, had in a strong statement, urged the Federal Government to deploy every necessarily available resource at its disposal to ensure that all Christians in the captivity of Boko Haram and ISWAP terrorists regain freedom

But Buhari, in a statement signed by his Spokesman, Garba Shehu, assured CAN and other Nigerians that the security forces are working endlessly to secure the release of hostages in Boko Haram captivity.

The president appealed to Nigerians not to see terrorist attacks and plans as a religious fight or persecution of Christians, adding that “Not seeing terrorists as they should be is exactly what they wish to divide Nigerians”

The statement read: “The security forces of Nigeria are working continuously to return those taken hostage by Boko Haram to their families, friends and communities. In doing this, the government has full confidence in their ability to accomplish the task.

“Nigerians must continue to be united in ensuring that they do not subscribe to the terrorists’ message of division. Unfortunately, some leaders and politicians seek to make political capital from our religious differences.

“As we fight Boko Haram on the ground, so too must we tackle their beliefs: stability and unity in face of their hatred is itself a rejection of their worldview.

“This government shall never tolerate religious intolerance. We clearly and unambiguously restate our support for the freedom to practice whichever belief you wish.

“The politicization of religion – as forbidden by the constitution – has no place in Nigeria.”