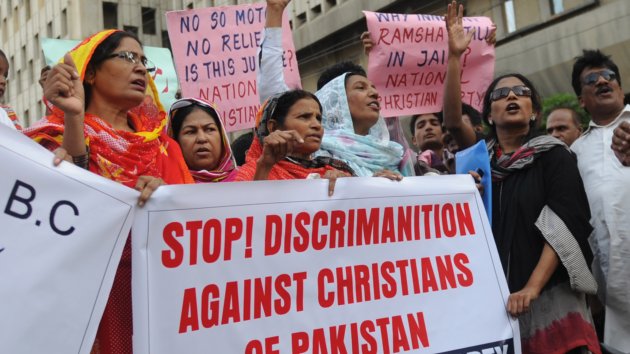 In an expanded order to remove “blasphemous” content from social media in Pakistan, a high court judge included a recommendation that Parliament include terrorism charges against those accused of blasphemy.

August 12 recommendation by Justice Shaukat Aziz Siddiqui of the Islamabad High Court is unlikely to result in action by Parliament, but it reflects a radical strain of thought at high levels in Pakistan and will be seriously debated in the National Assembly, sources said.

Aasiya Nasir, a Christian member of the National Assembly, told Morning Star News that judges of the superior and high courts should refrain from making recommendations that could increase hostility towards minority communities. The recommendation to add Anti-Terrorism Act (ATA) sections in blasphemy cases would only encourage continued misuse of blasphemy laws against rivals and minority groups, she said.

“Justice Siddiqui’s recommendations haven’t yet been taken up in the National Assembly,” she said. “No member has so far tabled any motion in this regard, and it is highly unlikely that the Pakistan Muslim League-Nawaz (PML-N) government will try to stir up debate on the controversial laws in the last few months of its government. Nevertheless, the recommendations will be thoroughly debated in the House whenever they are presented to us.”

In a detailed order on a petition seeking removal of blasphemous content from the social media, Siddiqui said that investigators should consider adding sub-section (F) of Section 6 of the 1997 ATA in blasphemy cases because they “directly hurt the emotions of Islam’s Prophet Muhammad.”

Sub-section (F) relates to inciting hatred and contempt on religious, sectarian or ethnic basis to stir up violence or cause internal disturbance.

“We hold the judiciary in high regard, but it hurts to see senior judges showing religious prejudice in their observations as well as judgments,” Nasir said.

Sen. Hafiz Hamdullah of the Islamist party Jamiat Ulema-e-Islam also opposed prosecuting blasphemy under terrorism charges, saying it would not serve any purpose.

“We just need to ensure that the law is not exploited,” he said. “But unfortunately, no one in parliament is serious in dealing with this issue.”

The high court judge’s recommendation also called for punishing those who falsely accuse others of blasphemy, something Hamdullah welcomed.

“Even the Council of Islamic Ideology has made repeated recommendations to the government to legislate against false accusations of blasphemy, but it’s an open secret that neither the government nor other secular parties in parliament are willing to do anything about this,” he said, adding that it was a fact that most blasphemy cases in Pakistan were motivated by personal enmity. “We oppose abolition of the blasphemy laws, but we will endorse any legislation that brings an end to wrongful accusations against innocent people, no matter which religious community they belong to.”

Attorney Riaz Anjum of the Pakistan Center for Law and Justice (PCLJ) questioned whether the judge had a constitutional right to make his recommendations.

“Although I agree with Justice Siddiqui’s observation that false accusers of blasphemy should be punished sternly, I am strongly opposed to inclusion of terrorism charges in such cases,” Anjum said. “The judge should not have encouraged investigation officers in this regard, as it will only add to the miseries of those falsely accused of blasphemy and make it difficult for their defense counsels to secure their release. Such a suggestion is also illegal constitutionally.”

Under existing law, a false accuser faces a maximum punishment of only six months or a fine up to 1,000 rupees, about US$10. The judge recommended punishments for those falsely accusing people of blasphemy equal to those convicted of blasphemy.

Senior attorney of the Supreme Court Saif-ul-Malook said that the judge was stepping out of his jurisdiction by suggesting application of the anti-terrorism law in blasphemy cases.

“The Supreme Court of Pakistan has clearly defined that the anti-terrorism laws are applicable only on people accused of creating chaos or unrest in the country through acts of terrorism,” he said. “In cases involving blasphemy, an accused is simply exercising his right of free speech by giving his opinion on any religious personality, which by no means falls under the definition of terrorism.”

Saif said Article 189 of the Constitution of Pakistan states that whatever the high court defines on a question of law shall be binding on all the judicial authorities of the country, including the high courts.

“It is also beyond the jurisdiction of a high court to recommend parliament to promulgate any law, as under Article 175(2) of the constitution, no high court can issue any such directions to the legislature,” he said.

Article 175(2) states that “no court shall have any jurisdiction save as is or may be conferred on it by the Constitution or by or under any law.”

Saif, who was the special prosecutor in the assassination case of former Punjab Gov. Salmaan Taseer and now represents Christian blasphemy convict Aasiya Noreen, better known as Asia Bibi, in the Supreme Court, said that he believed that rampant accusations of blasphemy in Pakistan could be discouraged if the parliament makes a law prohibiting arrest of the accused until a trial court proves them guilty.

“Accusers of blasphemy know that the police will immediately arrest the accused and throw them in prison without carrying out an impartial investigation into the serious allegation,” he said. “This serves their purpose of settling personal rivalries, as those accused under the charge are forced into imprisonment for years till a court decides their fate.”

Christian rights activist Shakeel Naz said the time has come for Pakistan’s parliament to seriously address blatant misuse of the blasphemy laws rather than clamping down on free speech rights on social media.

“I’m not sure whether Pakistan’s parliament will consider his other suggestions such as equal punishment for false accusers, but his advice to police officials will only worsen the situation as everyone knows how easy it is to accuse someone of blasphemy and register a case under the laws in Pakistan,” he said.

Siddiqui also ordered a complete ban on the social networking site Facebook if the website’s management does not conform to Pakistani laws.

“In case the Facebook management does not remove the indecent content against the holy prophet and revered personalities, the website may be banned completely in Pakistan,” the judge’s verdict said.

He directed the Federal Ministry for Interior and other departments concerned to vigorously take up the matter with Facebook management. On March 31 he had issued a shorter order on a petition seeking elimination of blasphemous content from social media. In the 116-page, detailed judgment issued on Saturday (Aug. 12), the judge directed the Pakistan Telecommunication Authority (PTA) to create a firewall to block sacrilegious content in Pakistan.

Attorney Anjum of the PCLJ said that since 2010, nearly 480 cases of blasphemy have been registered in Pakistan. Of these, 24 have been handed the death sentence, while 18 were given life imprisonment, he said.

“Everyone in Pakistan knows that the majority of blasphemy cases are motivated by personal vendettas, yet the legislature is doing practically nothing to contain this exploitation of the law,” he said.